on this night 47 years ago, candle in hand, i stood on the quadrangle* and for the very first time in my entire life sang these words:

what can i give him, poor as i am?
if i were a shepherd, i would bring a lamb.
if i were a wise man, i would do my part.
yet what i can, i give him: give my heart.

o my dearest friends, whether you stood there beside me that night or not, please know that i am truly grateful — beyond words — for each and every last one of you. Christmas blessings to you!

* for my students who don’t know what “the quadrangle” is, it is the heart of the campus of Westminster Choir College, where i learned anything worth knowing that i have ever shared with you. it is where i found my life, and where a piece of me will forever dwell. when i am dead and forgotten, it is where i want what remains of me left to rest.

here’s what it looks like (i lived in the building to the left of the picture):

An unpublished arrangement, written for my friend and student Kris Kehrer, exquisitely performed by The Ember Ensemble, conducted by my friend Dr Deborah Simpson-King.

Anyone who’d like a copy of this piece, including a pronunciation guide for singing the Polish first verse, please just send me an email, and it’s yours.

Merriest of Christmases to you all, my friends!

The recording of “I Will Be The Light” made in the National Concert Hall in Dublin will be broadcast on RTE Radio 1 at 0900 GMT on Christmas Day!

To live stream the broadcast, go to https://www.liveradio.ie/stations/rte-radio-1 and follow the directions given there.

(A huge thank you to Lesley Bishop, my dear friend at the RTE, for this information!)

Here is the first run-through of “I Will Be The Light” at the National Concert Hall in Dublin sung by RTÉ Cór Linn with Kylabelle McKinney, soloist, and the RTÉ Concert Orchestra conducted by Gavin Maloney. My thanks to Lesley Bishop, the choir’s administrator, for taking this video and securing permission to post it, and to Kris Kehrer for converting it to a shareable format. Enjoy!

It’s been a fantastic day to end an unforgettable week. And as wonderful as Wednesday’s premiere was (and believe me, it really was) today was more fun for me even than that, because today I got to do what I enjoy the most, and frankly think I do the best: working with voices in rehearsal. Here are a few samples . . .

That’s right! TALL vowels, please! (Not bad for a guy who broke his left arm 5 weeks ago.) 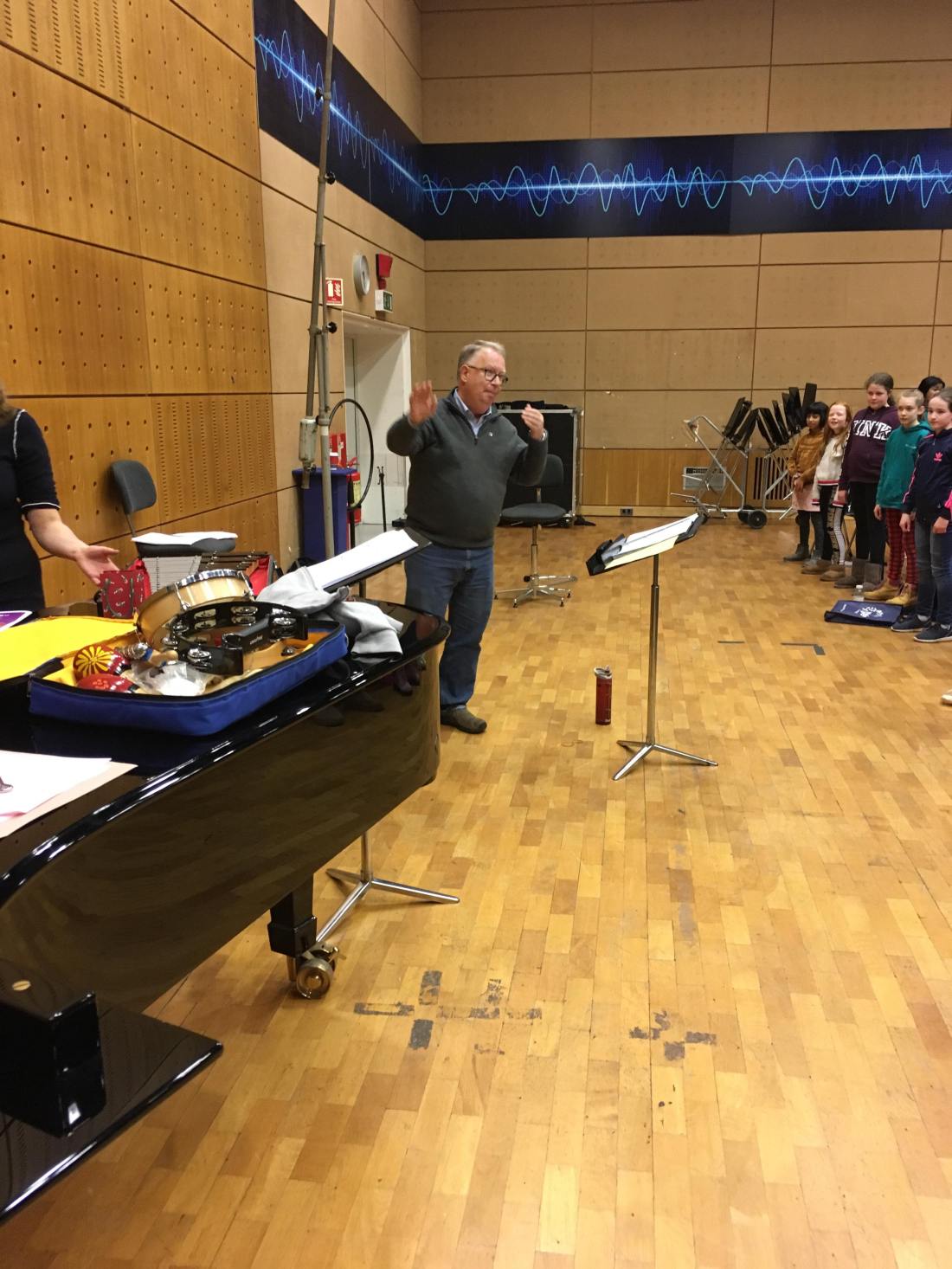 Yes, you can cue a piano while still looking at your ensemble. Not seen is Ms. Carole O’Connor, who definitely deserves to be called a collaborative keyboard artist.

Yes, soprani: open your lower backs wide, and all of a sudden it really isn’t that hard!

The fellow in the middle is Fr Liam Lawton, a wonderful composer and artist. We share a home at GIA Publications, and he once sang with Dr Norah Duncan as his pianist! The young man on the right is Ciaran Jack Crangle, a young but incredibly gifted operatic tenor. Keep that name in your mind — he’s one to watch!

This is about the happiest I get, working with smart singers and changing things for the better in ways they can remember and replicate without me!

My deepest thanks to Lesley Bishop, the indefatigable manager of all things choral at RTÉ, for whom I have to thank for these pictures and so much more, and to Mary Amond O’Brien, the wonderful conductor of these ensembles, for the opportunity to make music with them. I can’t wait to come back and be with you all!

Poetry lovers will recognize the first half of this title as the beginning of “East Coker,” the second of T. S. Eliot’s Four Quartets (1940). But the tradition from which Eliot draws is far, far older than that, and it looks like this:

This is one of the cleverest pieces in all music history, Ma fin est mon commencement (“In my end is my beginning”). The author of the text and composer of the music are one and the same genius of a human being: Guillaume de Machaut (c. 1300 – 1377).

Machaut is unquestionably one of the great composers of all time, if one of the most neglected, and wrote this particular piece of music in a structure that both shows and tells the story of the text with dizzying precision (technically, it’s a canon canzicrans over a palindrome, to be specific).

You can listen to (and watch a brilliant animated score) of this astonishing work here. An equally brilliant explanation of how Machaut makes this happen, which I just know all but none of my theory students are dying to read, can be found here.

What’s the point of all this esoteric scholasticism? It is just more of Custer showing off again, full of arcane pedantry and useless academic pretense?

It’s simply to say with utter clarity a truth that is particularly poignant for me today:

Every ending opens the door to a new beginning,
Every beginning requires that something else must end.

Part of me is remaining behind here in Ireland. Like any traveler, I know where home is, and I want to be there, enjoying all it holds. But I have been forever changed by being and spending time here, in the land from which my mother’s mother’s people came.

I have come to love the gentle accents and sly wit that I hear in the air around me as I walk her rain-swept streets. I have fallen in love with the five thousand shades of red hair and ten thousand thousand shades of green she freely holds up for my eyes to see. More than a bit of a homecoming it’s been for me, and that’s for true.

And now, as if for the very first time, I finally begin to truly understand words that have haunted my life for more than two decades, as some of you well know:

I will arise and go now, for always night and day
I hear lake water lapping with low sounds by the shore;
While I stand on the roadway, or on the pavements grey,
I hear it in the deep heart’s core.

But most of all, Ireland has taught me how central storytelling truly is to the choral art. Stories, of course, are as full of beginnings and endings as anything else I know. I’m chastened by the obviousness of this insight–and humiliated by my obliviousness to it until now. For years, I’ve approached choral music making based on text, focusing on how it’s built, and how it works. And now I see that in fact I’ve missed the boat.

The name of that boat is meaning.

Meaning is what carries us from the beginning to the end of the story we tell in song, because meaning is the story itself. It is what it does, and it does what it is, which is the definition of an encounter with the divine, a sacrament. Meaning is like that. So’s music.

Meaning is where all those phonemes and rhyme schemes and shadow vowels have really been heading all along. It is the destination for all of the preparation, analysis, and technique I have tried to put into my conducting, and all the artfulness my choirs create. Without understanding this, it’s just a vain exercise, nothing more than an empty show. But rightly understood, it is incredibly liberating to realize that it is the story that matters, because it is the story that is the container of truth and beauty.

Coming home to that understanding means leaving some of my most cherished and most familiar tricks of the trade behind. Fine, then. Leave them. They were doubtlessly useful then, but I am not the same person that I once was. That time is over and done. On we go, and forward: second star to the right, and straight on till morning.

I came to Ireland not at all sure what I might find.
I found that I am leaving a part of myself behind, here, and that for good.

A quick start to the day for all of you on the other side of the ocean.
Here’s what the program looked like.
Sorry it’s a bit off-kilter and dark. Please take pity on the (amateur) photographer: 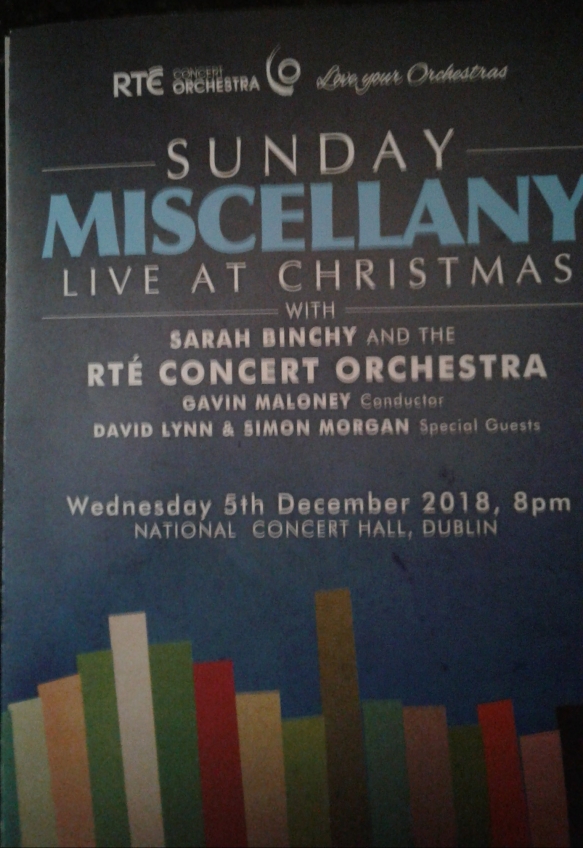 Yes, I am still pinching myself a bit.
I know it happened, but it all still seems surreal.

And on a more lovely note, here’s the view from the back door of my bedsit, suffused with . . . wait, is that sunlight? Yes. Yes it is.

Nothing like a sunny morning in Dublin 6 to finish drafting Theory III’s final exam!